Yea yea yea, I know the title of this post is cheesy. But I had to riff on “trulli,” didn’t I?

We were lucky enough to be in Italy this year on La Pasquetta (Little Easter). La Pasquetta is the first day after Easter. After the intensity of Lent, Palm Sunday, Good Friday, and Easter Sunday, families and friends in Italy get together to relax and enjoy each other’s company outside on the Monday after Easter. And on this Pasquetta, there were lots of people out!

Our Pasquetta was spent in Alberobello, Italy. After arriving at the Bari, Italy port, we took a bus about 45 minutes south. Alberbello is located in Puglia, in southern Italy, near the heel of the “boot” of Italy. Puglia is beautiful, but often overlooked for travelers in Italy. It’s relatively flat, with miles and miles of olive groves and several hundred miles of gorgeous Adriatic coastline.

Alberobello is one of many of Valle d’Itria’s string of città bianche or white towns. Row after row of trulli houses, all in white, for as far as the eye can see. Though trulli exist all over Puglia, there’s a dense mass of about 1500 trulli in Alberobello itself. It looks like a little village for gnomes or fairies. From the UNESCO World Heritage site: “The trulli , limestone dwellings found in the southern region of Puglia, are remarkable examples of drywall (mortarless) construction, a prehistoric building technique still in use in this region. The trulli are made of roughly worked limestone boulders collected from neighbouring fields. Characteristically, they feature pyramidal, domed or conical roofs built up of corbelled limestone slabs.”

The trulli of Puglia really are something to see. And their history is interesting, too. Legend has it that in the 16th century, this area belonged to the Counts of Conversano, a branch of the Acquaviva family who owned land all over the south of Italy. One day, the king of Naples informed them that they had to pay taxes on all the homes on this land. Rather than have to pay the taxes, the Conversanos demolished every house. This left many people homeless. To solve this problem, one of the Counts agreed to let the people build houses again, but the houses needed to be easily knocked down as soon as they heard tax inspectors were headed to town. The village was literally designed to disappear in a day if need be. Therefore, the trulli style of building was created, using dry walls without mortar so that they could quickly be pulled apart to avoid taxation.

We walked around town and learned a bit of the history. Then, we were invited up on a local’s rooftop for some liquor tasting while enjoying the view. We must’ve tried five different liquors, each one making me more and more buzzed up there. Marc bought a bottle of pistachio liquor. It was really good!

In Puglia, seafood dishes dominate the scene, with squid being a popular ingredient. And, of course, pasta, pasta, pasta. We ate plenty of it during our time in Italy! Alberobello has long been on my bucket list, and I’m so glad we were finally able to check this one off the list. It’s a beautiful place. Next time, we’ll spread out and see more of Puglia! 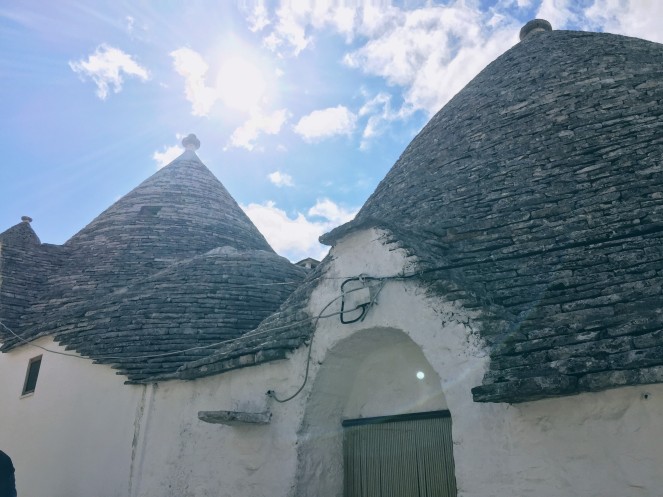