Marc here. Much like soccer, I got everything I could set up for Vincent to play ice hockey in Schaffhausen prior to us even arriving in Switzerland. In fact, the very first thing that Vicki and I did on our first visit to Switzerland was to meet someone to get a tour of the ice arena and learn about the hockey club. Of course, we were late to that meeting, likely reinforcing the stereotypes that punctual Swiss have of disorganized Americans. Vin had his first soccer practice the day after we arrived in Switzerland, and his first hockey practice a day after that. Just two weeks later, he had his first hockey tournament with his new club.

There were a few big changes for Vincent to adapt to at first. Youth ages 9-10 in Switzerland are referred to as “Piccolos” and their games are played “cross-ice”, instead of using the full rink. Games run 30 minutes, with a horn every minute that signals a mandatory shift change. There are 4 skaters and a goalie on the ice for each team at one time. Although I believe strongly in the developmental value of this style of games for youth hockey players, Vincent was already used to playing “full ice” in the USA and didn’t love the perceived step backwards. On the other hand, the physical style of play in Switzerland was something he was not prepared for initially. Players push and shove and almost check, and referees simply let play continue.

As with soccer, Vincent was fortunate enough to have one teammate who was fluent in both English and Swiss-German. Ashton immediately became Vin’s closest confidant on the hockey team, and often helped him understand what coaches were asking of the players. Assistant coaches Juan and Roman also spoke good English and made sure Vin was on the right track. Vincent often suppressed his personality, and seemed to be very businesslike in his approach to hockey, trying to avoid the awkwardness of interacting with German speaking teammates, but his coaches appreciated his fundamentally sound and team-first style of play, often nominating him to serve as Captain for games. About mid-way through the season, the coaches offered him the opportunity to also play with the next higher age group, the Moskitos. He relished the opportunity to return to full-ice hockey, but also had to cope with the fact that as a 9 year old he would be playing in a league of 11 and 12 year olds in which checking was permitted in games that lasted three 20 minute periods. He wasn’t always anxious to pursue a puck into the corner with a huge defender bearing down on him, but he competed, which is all we ever ask of him. He finished out his first year with both teams, but stuck to only the Moskito team in his second year, even though he was still technically in the Piccolo age group.

One of the coolest things about playing hockey in Switzerland has been the variety of opponents with which Vincent has had the opportunity to compete against. As a Piccolo, his team competed in a tournament with an FC Barcelona hockey club. It turns out that FC Barcelona supports youth sports programs in a variety of sports other than soccer/football.

His last tournament in April 2017 included teams from Germany (with one full of players of Russian descent), Austria, and the Czech Republic, with EHC Schaffhausen representing Switzerland.

Throughout our time in Switzerland, Vincent has been the most reluctant to allow himself to enjoy and cherish the complete experience. That reluctance finally started to break down, better late than never. During the last international tournament, Vincent became more  sentimental about his team and his entire experience. He finally let his guard down a little and showed his normal, goofy personality. Like many things when living abroad, it wasn’t always easy, but the fun far outweighed the challenging times, and the benefits of the experience will be reaped for years to come. 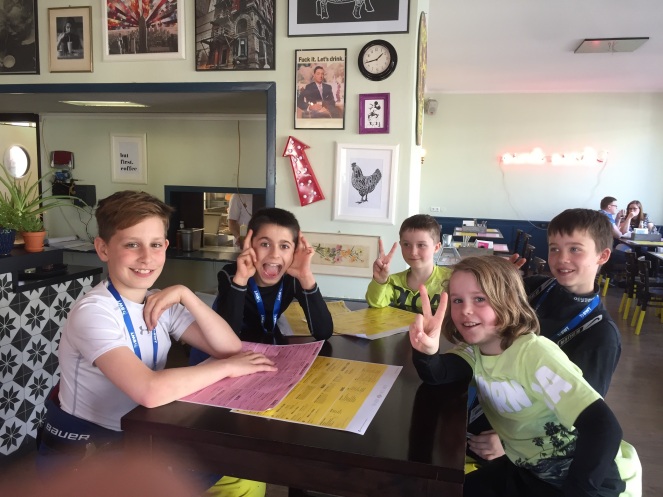